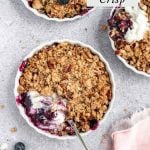 This Blueberry Pecan Crisp is the perfect simple summer dessert and such a fun way to use up those delicious summer berries! Whip up the nutty crumble and eat it straight away or leave it in the fridge and bake it later.

I don't think it would truly be summer if we didn't make a fruit crisp! Or a crumble, call it what you like. Although, as we're including some oats here, this is technically a crisp! And it's such a great way to use the amazing berries we have available at this time of year - today we're using blueberries! For me, blueberries aren't a classic crumble filling but after trying them here, I am converted. I made a plum and blackberry crisp a few years ago and I was so obsessed I knew I needed to recreate it, but with blueberries. The result was so vibrant and tangy, so let's get baking!

Ingredients in this fruit crisp

You just need a few simple ingredients to make the most incredibly delicious fruit crisp:

How to make a blueberry crisp

Fruit crisps are one of the simplest and easiest desserts to make! It's hard to go wrong and the results are stunning!

Serve up this juicy blueberry crisp with a dollop of something creamy and cool on top. Vanilla ice cream is the obvious choice but I can highly recommend a big spoonful of thick and creamy Greek yoghurt too (as shown in the photos!). Crème fraîche would also be delicious. Enjoy!

Keep leftovers in the fridge for up to 3 days and either eat cold or reheat in the oven to keep the topping crisp.

I hope you'll give this blueberry pecan crisp a try! If you make it, be sure to leave a comment, rate the recipe and tag me on Instagram! I love to see your creations!

If you're looking for more blueberry recipes, why not try: 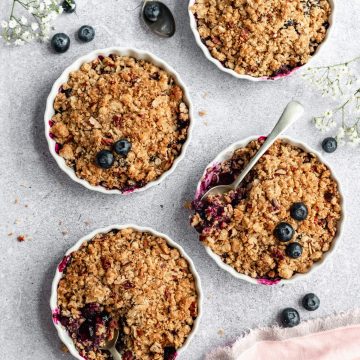 This Blueberry Pecan Crisp is the perfect simple summer dessert and such a fun way to use up those delicious summer berries! Whip up the nutty crumble and eat it straight away or leave it in the fridge and bake it later.
5 from 1 vote
Print Recipe Pin Recipe ⭐️ Rate Recipe
Prep Time: 40 minutes
Cook Time: 25 minutes
Total Time: 1 hour 5 minutes
Servings: 6
Author: Sasha Hooper