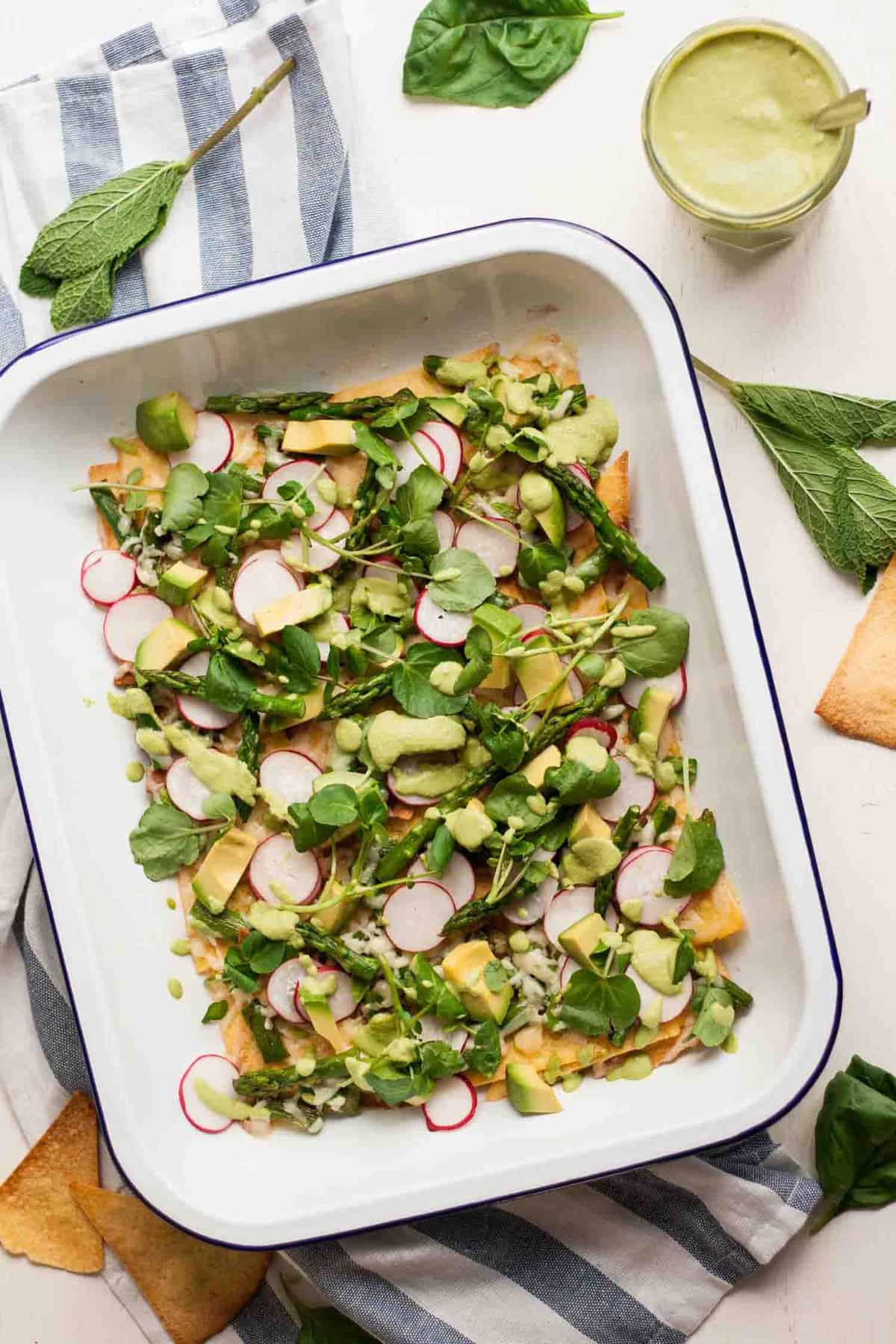 Who else out there loves to eat nachos, until immediately after eating them, at which point you regret ever putting them in your mouth? Just me? Gah, I feel like I could eat nachos for every meal whilst I’m eating them, but my body hates me afterwards.

That said, my nachos usually consist of a good helping of refried beans, store-bought tortilla chips and way too much sour cream. I know, I know. They’re definitely a treat.

Oh, some amazing nachos have come out of my kitchen, let me tell you. Whenever my American brother-in-law comes to visit, our kitchen hosts a Mexican food cooking frenzy. I mean it – vats of guacamole, salsa and refried beans, queso fundido and whole oven trays of nachos – it’s awesome. We once even made a burrito of epic proportions – it was about 4 ft long! (And I ate a tiny sliver of it and the guys dealt with the rest). 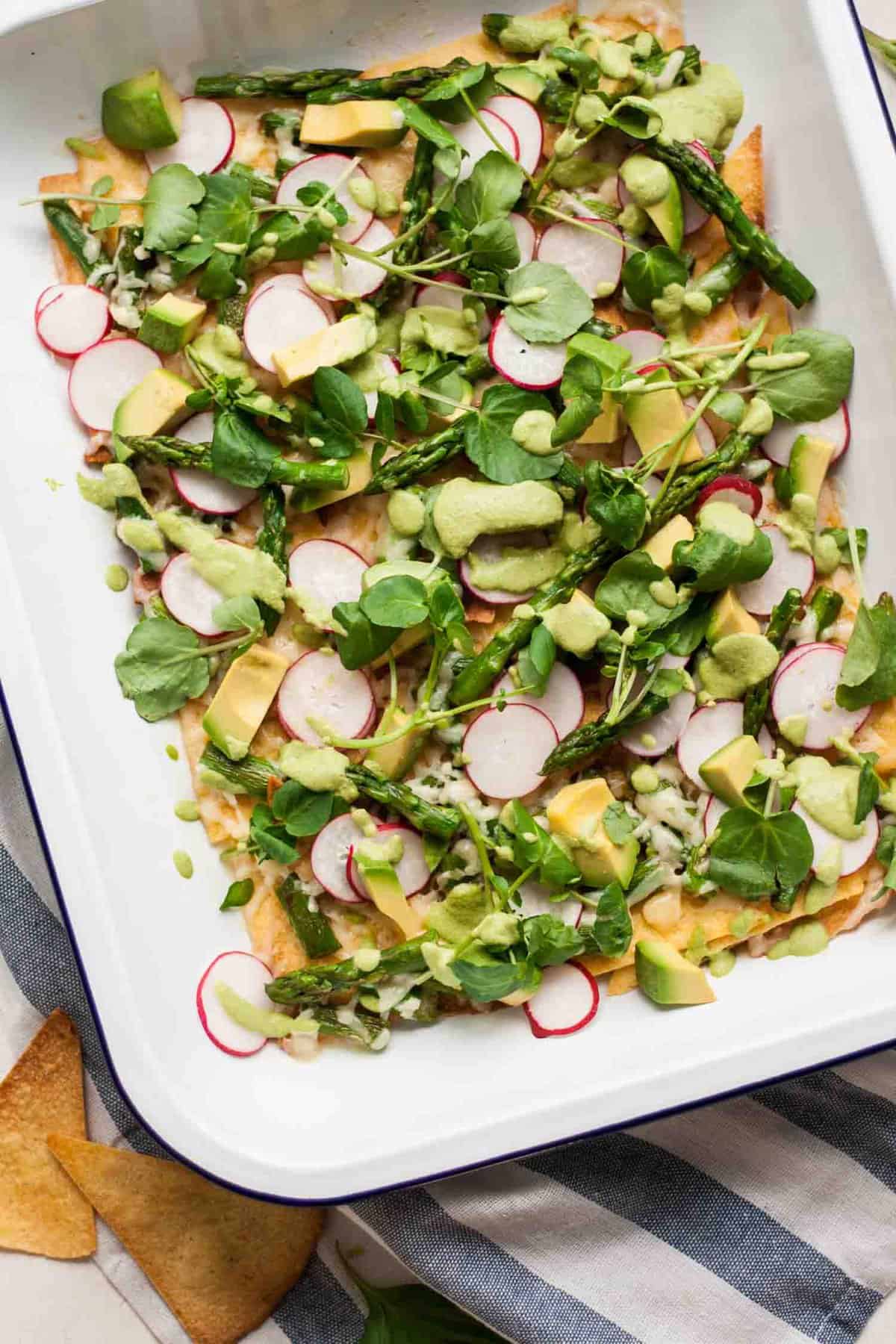 These Healthy Asparagus Nachos are a world away from the grease-laden offerings that you normally associate with nachos. They’re light and fresh and incredibly delicious and most importantly, you feel good after eating them. Like, really good, because you just ate a super tasty meal that was loaded with good stuff (and just a sprinkling of cheese because nachos need cheese!) and you aren’t stuffed to the rafters. How good is that?!

And as promised, these nachos feature that insanely good 5-Minute Vibrant Spring Sauce that I posted on Wednesday. Trust me, you’re going to want to try these! The sauce makes them. 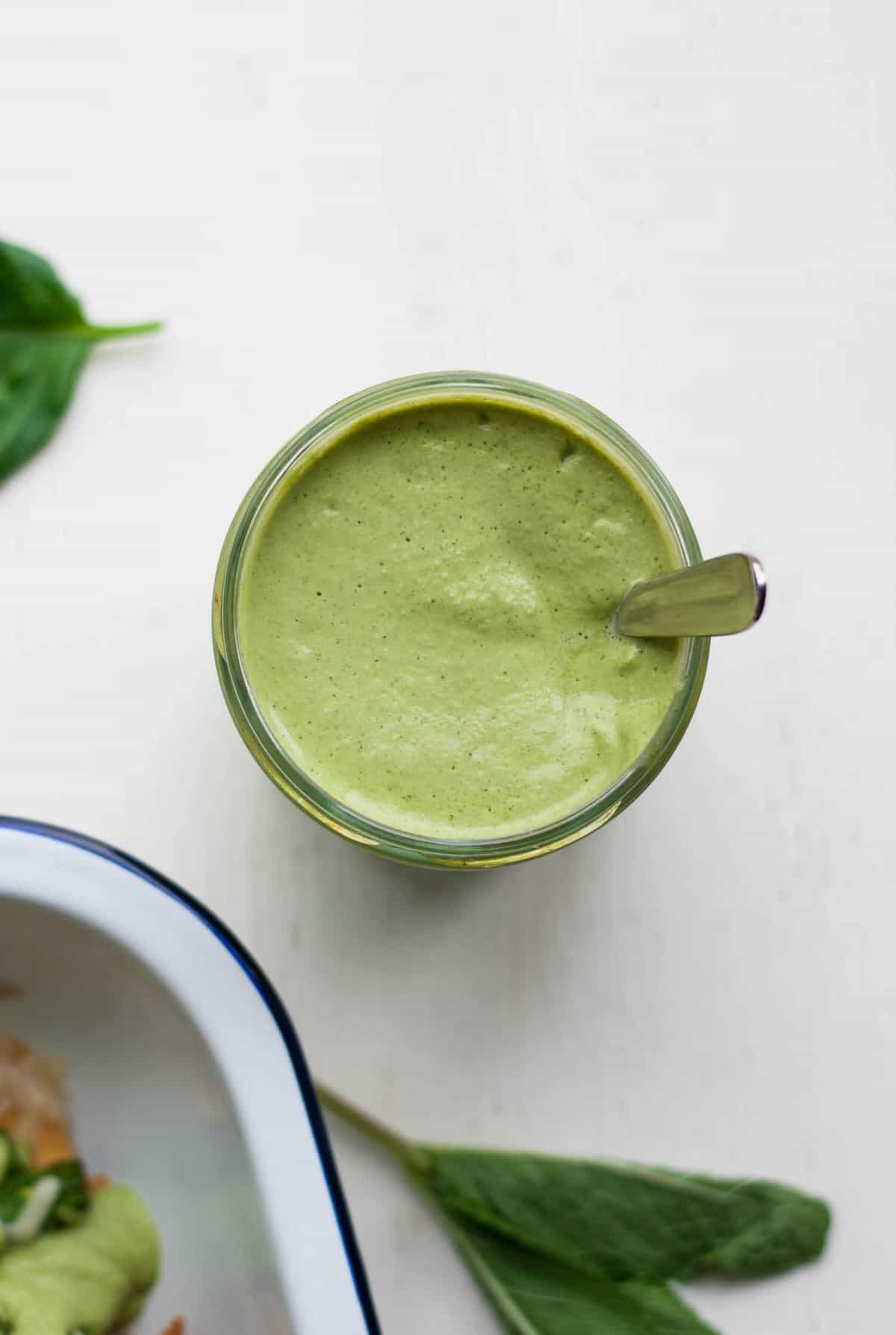 Firstly, we make our own tortilla chips. Ok, so I’m not instructing you to make your own corn tortillas (but if you have some free time, do!) but still, by baking up your own you can control the amount of salt and oil going on those chips and plus they taste a million times better than the bagged variety. Unless you get those authentic Mexican totopos which cost about £10 a bag…

So you get your corn tortillas (the best you can find) and chop them up into triangles. Then you rub them with a little oil, sprinkle with salt and bake for about 10-15 minutes until crispy. And that’s the other thing about this recipe. It’s so quick to make! There’s literally no excuse not to make them.

Whilst the tortilla chips are baking you quickly sauté off some asparagus and once they come out of the oven you scatter with the asparagus and the cheese, pop them back under the grill for a couple of minutes until it gets all melty and then you adorn with all of the toppings and devour! Simple, quick, satisfying and (mostly) healthy!

They’re spring in nacho form. Bet you’ve never had that before. Make them this weekend! 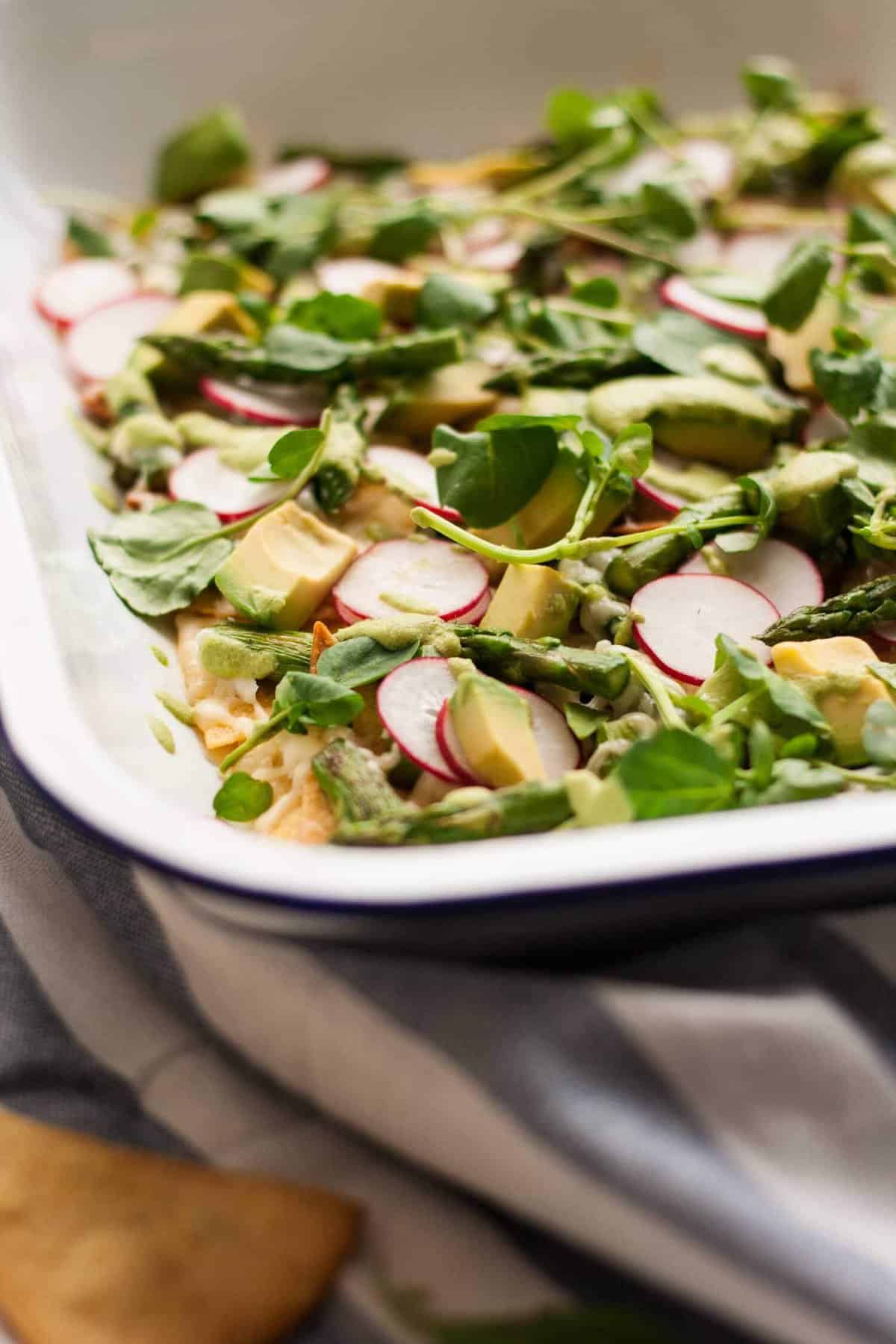 You’ll have more sauce that you need for these nachos so do the logical thing and make double nachos! I’m kidding, kind of. The sauce is great as a regular dip and would make a knockout salad dressing too. In fact – watercress/radishes/avocado/asparagus – you’ve got yourself a pretty awesome salad right there doused in that sauce. Yum! 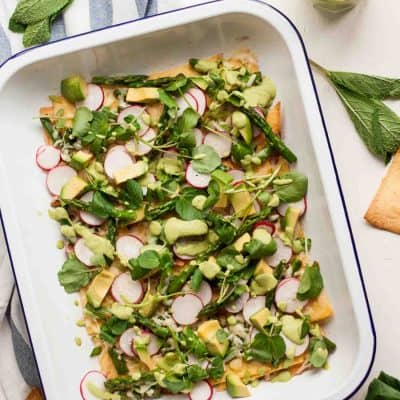 Calories: 354kcal
Course Appetizer
Cuisine British
Did you make this recipe?Tag @eatloveeats on Instagram - we love to see your creations! 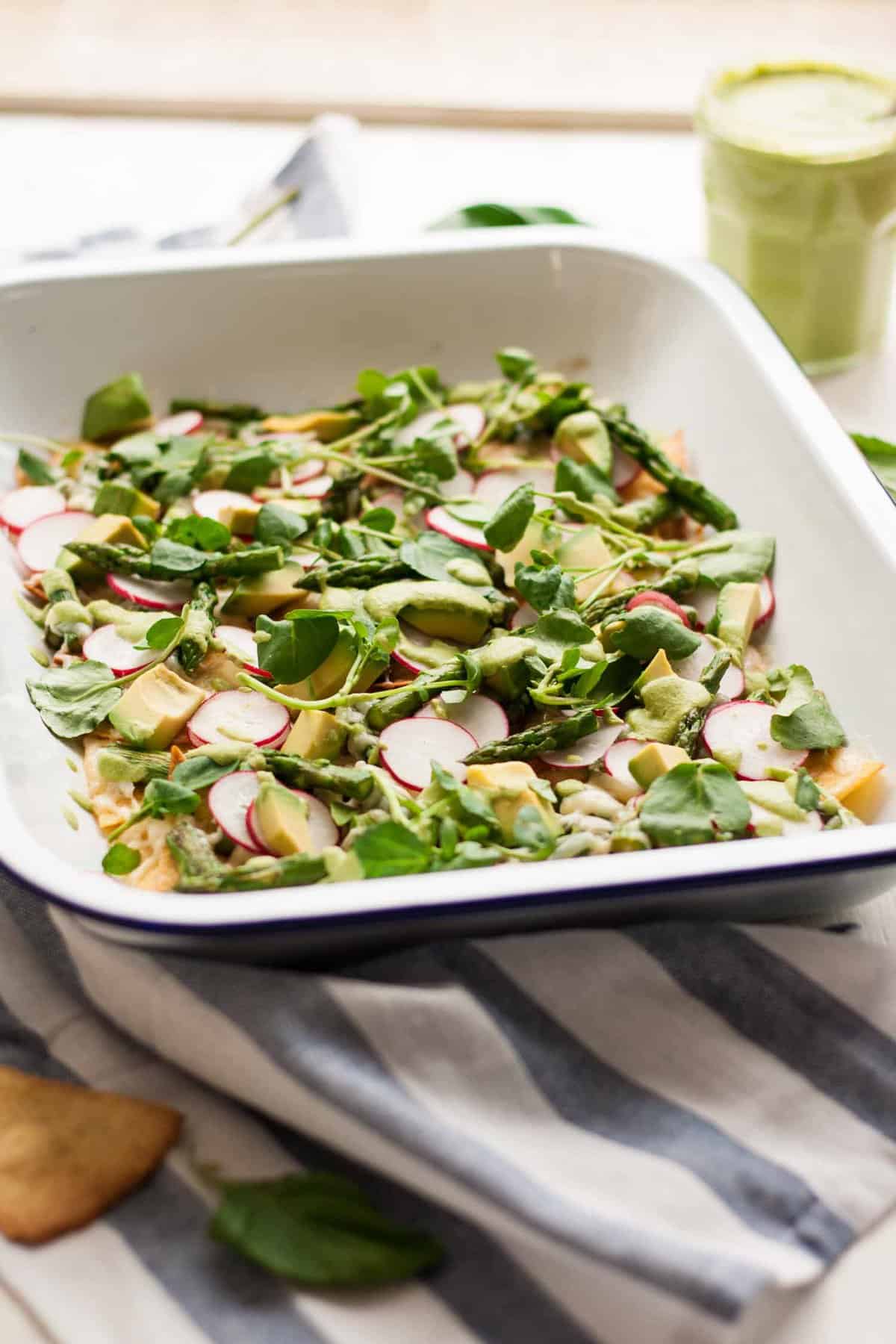 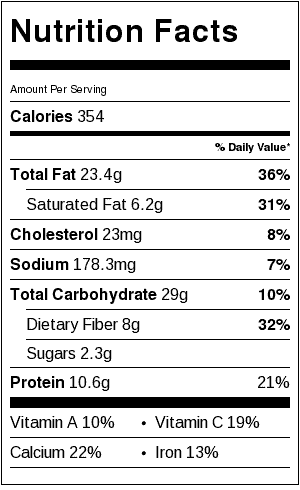